A little bit of sooty and sweep

The first bit of major building work starts in a few days when the eastern chimney stack will be partially rebuilt, flue liners will be dropped for future log burners and sections of the roof repaired.

Now it doesn't take a rocket surgeon to work out that the flues in both the eastern and western stacks will have never seen a liner or a brush in their 150-or-so years, and the chances were that they'd be gopping with soot, salts and other nasty materials that over time would probably want to leach out into the house through the brickwork - if they're not already. In fact before we stripped the wallpaper in the Blue Bedroom (Bedroom 3) there was already some icky brown staining evident on the chimney breast, so that had roused our suspicions from the off.
Also, if we've learned anything from our friends at Renovating an Old Stone Cottage, it's that chimney salts can be hygroscopic and actually draw moisture out of thin air and send it into the brickwork, thereby adding to the damp and humidity in the property. So in preparation for the building work we booked a chimney sweep, who came yesterday.
And in preparation for his arrival, I destroyed stuff for a couple of days before that.

The Living Room already has a circa 1970s open fire and the Dining Room has a tired old Coalbrookdale Little Wenlock log burner that feeds through a register plate into the chimney, so Mr Sweep was sorted in terms of access to the flues downstairs, but Bedroom 1 and Bedroom 3 have had their old fireplaces covered up and they needed to be uncovered to see what delights were hidden within. So armed with goggles, gloves, a respirator and Man Trousers, I jumped straight in and prepared to jump straight back out again if I saw a spider. 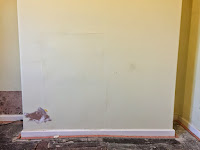 The fireplace here had been hidden using cheap fibreboard which had subsequently been wallpapered and painted over.
The passage of time had seen the outline of the board become visible through the surface of the paper so with the help of a Stanley knife and lots of manly grunting I pulled the board away in bits to reveal the cobwebby delights of an ancient pigeon graveyard that was partially buried in what looked like soil, but what I later learnt was probably petrified nests that were so old they had crumbled in to dirt. 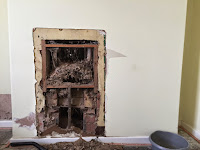 Construction-wise the fireplace opening was fronted by a cobbled-together non-structural wooden frame, presumably to stop the fibreboard sagging in to the space behind it. If the board had been attached originally then it wasn't any longer.
Behind that were four or five courses of bricks that had been chucked in and loosely mortared in place on either side, across the centre of which was a narrow metal grate of some kind that hadn't been inserted with any degree of enthusiasm and wobbled about a bit. 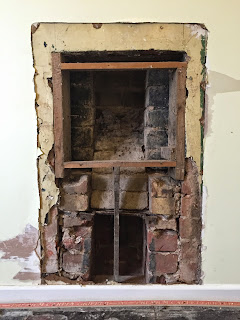 Directly above the grate thing were a series of bricks that sloped up and away from the opening towards the back of the firebox. Not being accustomed to the anatomy of a fireplace I'm yet to work out what this was intended to do. It's a little bit like an inverted throat damper, at the top/back of which was a hole the size of a tennis ball that fed down behind everything to the ash dump below at floor level. The ash dump itself had quarry tiles at its base.
On either side of the sloping brick thing were black(ened?) bricks sitting directly above the lower bodged courses, but set back from them a little. Again I'm yet to work these out, but if they're original then we'll hopefully be keeping those and incorporating them in to whatever we do with the fireplace in the future.
The lintel was just a flat iron bar that seemed to be supporting everything above it pretty happily, which is a relief.

Here's a tip: If you decide to board up or otherwise cover anything that future owners of your home might want to unearth, stick a current newspaper in there so the work can be dated.
That's exactly what the person who did this work decided to do on August 11, 1957, when he stuffed a bunched-up copy of the News of the World in a recess at the back of the ash dump.
It's fascinating to know a little bit of precise history and saves me pondering how old the pigeon skeletons were. Some of them are likely to have died there when the people who were to eventually become my parents were still at school!

Having poked my head inside to look up the chimney, where I found it to be as clean as a whistle (never even used, perhaps?) and unsurprisingly uncapped, I decided to leave all of the structure in place for now and move on to...

Here, things were slightly different.
A vent had been stuck on the chimney breast wall, off-set to the right, and no amount of tapping on the gypsum plaster would reveal if there was even a former fireplace there at all. The noise was consistent all the way around the chimney breast and up to where I already knew it was solid.

Knocking the vent off revealed a letterbox-shaped opening that, again, was chock-full of 'soil' and the breastbone of an unidentified feathered friend. As this was obviously a young boy's bedroom for the previous occupants, it couldn't have been a terribly healthy set-up.
The narrow hole had a solid-feeling cement base to it and bricks on either side which at first made me think that any fire that may have once been there was a standalone stove that stood on a cheap concrete hearth that I found underneath the carpet and vented up the chimney through the opening. Where the hole turned to head up the flue that, too, was packed solid with dirt. 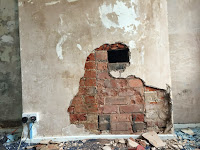 With exploration in mind and using a hammer and bolster chisel I started carefully chipping away at the gypsum plaster around the hole, and discovered two different types of brick. Down and to the left of the opening I found seemingly original orange brickwork that was beginning to crumble because of the moisture-retaining properties of the plaster that had been slopped on top of it - along with painted wallpaper as a covering just to make things worse. But directly beneath the hole were more modern, more dense bricks. 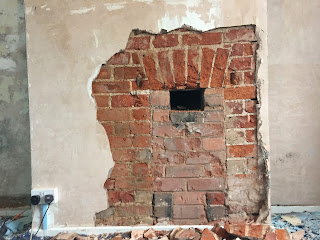 It quickly became apparent that there was indeed an old fireplace lurking here, but unlike that in Bedroom 1, the whole thing had been bricked-up, leaving just a small opening for the chimney to breathe... which it would have stopped doing once the first doomed pigeon took a nosedive down the uncapped flue.

Another couple of hours of careful chipping revealed a narrow fireplace topped with a lovely brick arch which, again, was crumbling because of the plaster that had been laid directly on top. We might be able to save it somehow when it comes to reinstating the whole feature, but we'll have to see how it goes.
And once again the lintel was just a simple flat iron bar that seemed to be in the same reasonable shape as the previous one. Of course by 'reasonable' I mean 'not in danger of imminent collapse'. 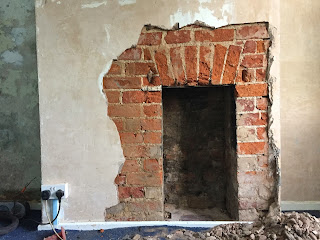 Knocking the first two or three courses out from underneath the opening so the chimney sweep could get access revealed evidence of a rubble-and-loose-concrete-filled void beneath what I had originally thought was a cement slab of sorts at the base of the vent hole.

Once Mr Sweep had been and gone I continued knocking bricks out to the point where I revealed an open fireplace devoid of any structural or original brickwork with, once again, quarry tiles forming the base of the feature. 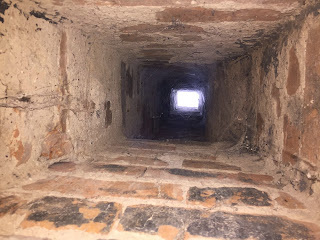 The arrival of the chimney sweep was heralded with a mug of coffee and a quick tour of The Lodge, and he decided that the flue in Bedroom 1 was indeed sparkly clean and didn't really need sweeping out.
The only thing sweeping would have done, he said, would be to remove some of the lime pointing from the brickwork that had deteriorated and loosened over time (lime mortar is a sacrificial building element and will do that over the years) and it was more use left in place than filling a plastic bag in the courtyard.


Overall he spent about five hours at the house drinking coffee, having a good old natter and occasionally sweeping flues, and one of the main things he discovered was that at some point in time the flue from the Living Room had been on fire. 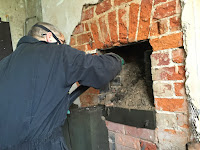 This is a major development for two reasons. First of all it could explain why the upper half of the western chimney stack has been rebuilt at some unknown point in time - the devastatingly fierce heat could have destroyed some of the brickwork - and it could (but certainly not definitely) explain why there's a crack running up through some of the sandstone blocks on the external wall in the direction of the chimney stack. It's not a crack we're particularly worried about but it's nice to have some clues about its potential origin.

So that's about it. The upshot of all this is that we now have two new old fireplaces to get our thinking caps on about, a log burner out in the courtyard for me to attempt to renovate at some stage, a bunch of bags of chimney fodder outside, four clean flues and a lot less coffee than we started out with.

Oh, and finally... the picture I know you've all been waiting for: