A few days ago I started angle grinding jagged and uneven brickwork where we recently discovered that a wall had been knocked down between the Living Room and the dog-leg nook area.

I haven't finished yet - in fact I'm going to go back in when I publish this post - but it's a very, very messy job that causes so much dust that I can only be in there for a few minutes at a time before I literally can't see my hand in front of my face.
As a result the entire room is covered in a thick layer of orange brick dust which has resulted in something of an unsurprising discovery.

We are not alone. 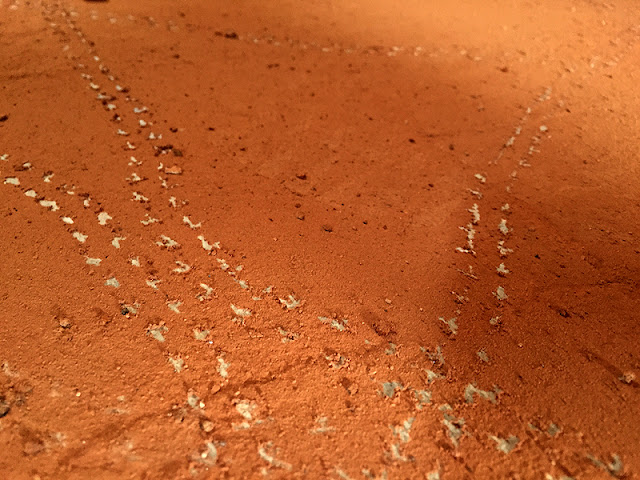 I poked my head in there earlier to assess what still needs to be done, only to find a criss-cross of teeny tiny little footprints in the carpet of dust on the quarry tile floor. The majority of the haphazard tracks seem to be in the nook section although whatever caused them appears to have investigated the wider room a little bit too.

On close inspection the individual prints seem to be cloven which suggests that a drunken miniature goat is living in the house somewhere, but I find that unlikely because there's not enough for it to eat and it won't be able to get in the fridge. The door is quite stiff.
As I have also ruled out slugs, snails, snakes and crocodiles that leaves three possibilities - a rodent, a bug or a massive spider walking on its hind legs. A few minutes ago I remembered finding a dead cockroach outside by the garage some weeks back, which I didn't really think much of at the time, but now that has stuck in my head even though I've got no evidence to back it up yet. I really, really don't want it to be a cockroach. 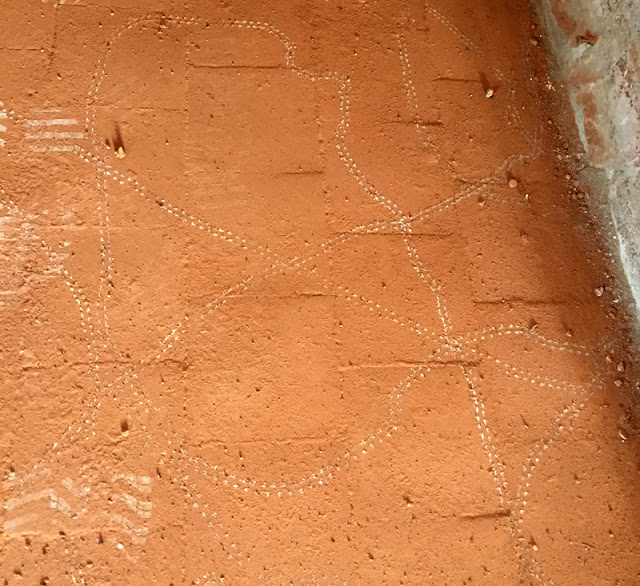 Regardless, whatever it is certainly isn't contributing to the mortgage so it needs to go. Besides, there's a sizeable gap under the Living Room door and a couple of the other rooms are chock-full of our belongings so the last thing we want is to have our stuff nibbled-at by an uninvited guest.

So later on I'll set a mouse trap and maybe lay out some strips of gaffa tape on the floor to see what we come up with. I don't fancy having to brick a struggling and frightened mouse wrapped up in tape, mind, so that measure may be a last resort.

EDIT
Having given the matter some thought, I reckon it's a bug of some kind rather than a rodent.
The tracks are too haphazard to be a rodent - mice, for instance, would run along the edge of the wall as if they had somewhere to go, rather than amble about aimlessly in the middle of the floor where there's nothing to scoff.
The footprints aren't right either. A rodent's feet are like those of a titchy cat - pads and claws rather than hooves.
We have had quite a few black beetles in the house but nowhere near large enough to leave tracks so big...