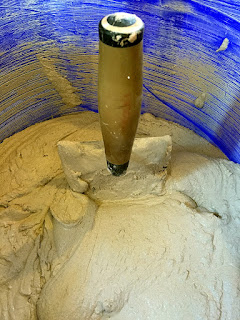 As an entire conversation it isn't much, but it's how we're expecting to greet the end of this particular chapter in the project... kind of non-plussed... although at least it's a step up from our recent range of attitudes towards it.

You see this isn't my first attempt at writing this particular blog post. In fact it's not even the second, third, fourth or fifth.
<counts on fingers>
Actually it is the fifth, but that's still three more attempts than usual, mainly because I literally have no clue how to phrase what's in our heads. I got quite far during the third attempt, while the work was still supposedly going on, but it was during an angry period and I was tying myself up in knots trying to explain how I was feeling about it all.
Bits of this particular version were started while I was more resigned to the delays ahead but now, as I wait for the final few hours' work to be done, I'm in the Fed Up To The Back ****ing Teeth stage so I have no idea how it'll go. Nevertheless I'll send it live when everything is done and dusted (however long that takes), by which time the following line will be true (edit: just a few hours later, as it turned out to everyone's astonishment):

So, the lime plastering's finished.
Almost three months after period property renovation expert Andy Skinner walked in to The Lodge, trowel in hand, and knocked up his first bucket-load of lime plaster, the Living Room and Bedroom 1 are done.
That equates to about two months over schedule and two months of trying to occupy myself, waiting for the time I could get in those rooms and do all of the jobs that hinged on the plastering being finished before we could get them sorted out and move in.

That's two months of mounting frustration for us both for just two rooms. And one of those was just a single wall and some patching.

But it doesn't really begin there.

It all begins back in August when we started looking for lime plasterers (a rare breed, and good ones are even rarererer) and ended up calling three people for quotes.
One, who had worked at our friends' house so we knew his work, couldn't fit us in before our arbitrary finishing date of 'Christmas', and another one (who came loosely recommended) brought his mate so they could each stand like statues and stare at the walls in rooms they wouldn't even be working in. In total silence. They were very strange.
They were broad mumblyIrish too, so I couldn't understand a word they did say. I have a sneaking suspicion that I agreed to have Dawn either jetwashed or covered in Tarmac but they never came back to do it. Their loss - I can be a generous tipper.


And then came Andy from Severn Plastering (not to be confused with our pal Andy from SamTheDog), who really impressed me from the get-go because he seemed to know his stuff. He was friendly, chatty, enthusiastic and although he was busy he could get done by Christmas. It would be a couple of weeks' work spread over a month or so because he would be fitting us in during lulls in a bigger job he was doing somewhere else (a common occurrence on bigger projects with more trades) and, besides, different coats would need time to dry.
That sounded good enough and fairly typical for such a trade (I vouched for him because Dawn was at work) so we settled back and waited for the quote - which didn't come.

I gave it a not unreasonable fortnight then called Andy over a few days until he eventually answered. He apologised and said that some 'life problems' were happening which had derailed things a bit but he'd get the quote to us by the end of the week.


But his knowledge and understanding of period property renovation seemed excellent and I really wanted him to do the job so we gave it another not unreasonable fortnight before we gave up.

Cutting a longer story short the first plasterer (who we went back to) couldn't fit us in for a while, so in desperation, I gave Andy another call.
He came out again full of apologies and met Dawn this time. Yes, he could still do the job in the early new year (we'd given up on Christmas) and the big job he was on was delayed so things would probably move smoother and quicker for us.
He gave us a verbal quote there and then, which we accepted - good lime work is very expensive, and he turned up on February 5 and 8 to lay tarps and size things up properly before mixing that first bucket on Tuesday, February 9.

Actually, no.
The morning of the 9th started with a message from him to say there was a delay and he'd see me the following day, which is pretty much how the rest of the work went.
That day became another day here, two days there, maybe a week. The 'on my way' texts and occasional calls became reasons why he couldn't come that day, then for the most-part they dried up altogether only to be replaced by no communication at all.

When he turned up he would do full days sometimes, half days sometimes, or just a few hours. I understand that lime plaster needs to cure in stages which takes time, so there's a limit to what can be done in one sitting, but after giving him the benefit of the doubt for the first five or six weeks we came to the conclusion that there were significant reliability issues going on and although some 'reasons' were probably genuine, we were being given little more than plausible excuses for others.

It was just impossible to tell one from the other.

You might be wondering why I didn't say anything to him at the time, and that's a perfectly reasonable thing to ask.

In my defence I did ask every time, but when you're being drip-fed what could easily be genuine reasons in their own right and you start off taking them as such, there comes a point when you simply can't say anything more just in case you're wrong.
And that's complicated by the fact that good plasterers are thin on the ground so if you somehow scare one off you're left in the lurch. And on a purely personal level he's a nice, likeable bloke with a great line in movie-chat, which makes it even more difficult.

Anyway, Dawn and I have put our heads together to come up with a list of reasons we were given - some more than once and some related to each other, for why he had to arrive late/leave early, couldn't make it that day or didn't turn up for longer periods of time during the last three months:

And just to prove to ourselves that we're not imagining things, we've also gone through text messages and photos to plot the days that Andy should have been here. We're not sure about the few days marked in yellow but a weekend and Easter Monday are on there, both of which we were also told would be worked.

And then at some point over Easter came the death of his father.
Now what were we supposed to think? We were already wondering how one man can be so unlucky (a phrase we had literally used out loud) and then along comes something which makes us look like awful people for doubting him.

It took around a week of me texting and calling Andy to find out why he wasn't at The Lodge and by the time he got back to work almost three weeks later I simply didn't know what to think.
Outwardly I was understanding and sympathetic but a little area of my brain was wondering why he seemed to avoid the question when I asked when it happened. It was processing his unprompted-but-offered reasons for not putting an obituary notice in the paper (security) and to be entirely honest it was wondering if he had died before.

They're terrible things to think, I know, but Dawn used the words "crying wolf" and that's exactly what it boils down to.

He came back on Thursday, April 14, promising to make up for lost time that weekend.
He didn't turn up either day, but he did two full days and two half days in a row after that, then didn't show up for the next two days at all.

In the meantime he made a point of apologetically insisting that he doesn't usually work like this. He thanked me for our patience and said he hopes we'll use him again.

The plaster finish and detailing is great and just what we asked for, but we won't be having him back.
He has delayed significant progress in The Lodge by three or four months in all (including the quote palava), we've cancelled plans on promises that came to nothing, gone months without any form of heating in the house during the coldest parts of the winter and a fortnight ago had a rare, huge row caused by sheer frustration, so to knowingly put ourselves back in that situation would be nucking futs.
(I'm ashamed to admit that I was too cowardly to tell him this in person today - I came close but couldn't do it)

The kicker came during a chance conversation shortly after Easter between Dawn and a work colleague who she rarely sees.

It turns out he had some lime restoration and building work done a few years ago which eventually failed (not the plastering but rebuilt walls and suchlike) and he was in the process of threatening legal proceedings against the mystery tradesman. This person had apparently been unreliable and difficult to contact, stretching a short job in to a number of months.

"Whatever you do, don't use a bloke called Andy Skinner," he said without any prompting.

His emails really say the rest:

Note: I've thought long and hard about whether or not to name Andy Skinner and Severn Plastering (also known as Severn Lime Plastering) in this post.
I liked the man in a way - he was good craic and the final result is excellent, but his work ethic was terrible and I need to write about it because above everything else this is a warts-and-all account of our experiences. And it's Fair Comment (legally).

So I have decided to use it as an opportunity to let other people make a more informed decision if they decide to do some research. We did and found nothing either way.
Finally I've been specific about the company identity because I'd hate for anyone to get confused between him and other plasterers with the same name, who do exist.
Posted by Muz at 22:45:00