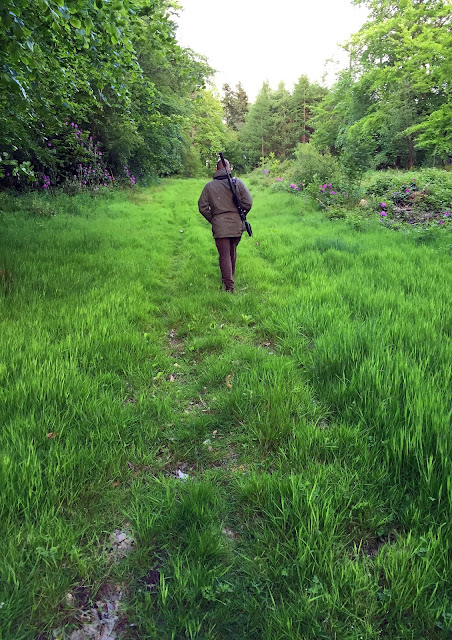 The strangest thing has just happened, and I don't really know what to make of it so I thought I'd write some words to see if I came to any conclusions.

I've just kind of accidentally been on a deer hunt in the woods.

I was sitting in the shed writing a fascinating blog post about carpets while Dawn was up at the house making tea (spag bol, if you're interested), when on the CCTV I saw a 4x4 pull up next to the house and the driver approach the front door.
Despite being vaguely aware that burglars tend not to knock these days I pulled my jeans on and sprang in to action, reaching him just as Dawn was opening the door.

Now, with The Lodge being right on the edge of a large area of managed woodland we already know that shooting goes on around and about and that this comes under the general catch-all umbrella term of The Shoot - pheasants, foxes, trespassers... that kind of thing.
Our visitor introduced himself as being part of The Shoot and, very kindly, he was showing a little bit of courtesy by letting us know that he was parking next to our house (not on our land, so strictly-speaking he didn't have to say anything) while he headed off to hunt Muntjac deer.

If you've read our post about the local wildlife you'll remember that we've heard Muntjac in the woods at night - twice now - and we were really quite excited by it.
So it was with mixed feelings that someone was on our doorstep announcing that he wanted to blow ones brains out. And not even for the meat - just for sport. I asked.

Nevertheless we had a polite chat about stuff, during which time I asked him not to shoot SausageTheCat. I even described him as being black-and-white and cat-looking. I needed to be sure that he was fully aware, you see. I stopped short at showing him a photo on my phone, though. Anyway, he said he'd be careful and that's all we can ask for.

I then, on a complete whim, asked if I could join him. I don't know where the question even came from.
And this is where the puzzlement comes in. I like to think that most of the time I'm a pretty level-headed and realistic person, so despite having lived all my life in towns and built-up areas I'm fully aware that people hunt for various reasons. I'm quite pragmatic about it. But unless said hunting is done humanely and for a reason that I agree with, such as vermin control or for food, I can't say that I'm a big fan of it.
Like hunting foxes with packs of dogs because it's 'fun'. No. Just, no.

Yet I saw an opportunity to see a little bit of real country life, so I asked the question. And he said I was welcome. And I went.

I spent the next 20-25 minutes following a rifle-carrying total stranger through the deep, dark woods, trying not to make noise in an environment that was made entirely out of sticks. We didn't speak much, but he showed me a few deer tracks and he pointed into the trees as I heard the sound of what was, apparently, the disappearing arse end of a roe deer that had been lying under a bush just passing the time of day. Like an Indian tracker he even had a feel of the ground to see if it was still warm although, disappointingly, he decided against tasting its poo to test the freshness.

He then told me that he was going to stand under a tree wearing a green camouflaged veil for the next hour or so and although I was welcome to join him I decided to head back... grateful that he hadn't seen anything that he was able to kill while I was with him.
Nevertheless, at Dawn's earlier request he promised to give us a knock if he did bag anything, so I'm watching the CCTV monitor as I type, waiting to see him dragging a bloody carcass across our garden, wearing its head as a hat. Which would be quite disturbing, I have to say.

So having typed all of this, have I sorted out my feelings about it yet?
No.
And I'm not sure I will either.
Posted by Muz at 21:11:00