Up on the roof - a first look 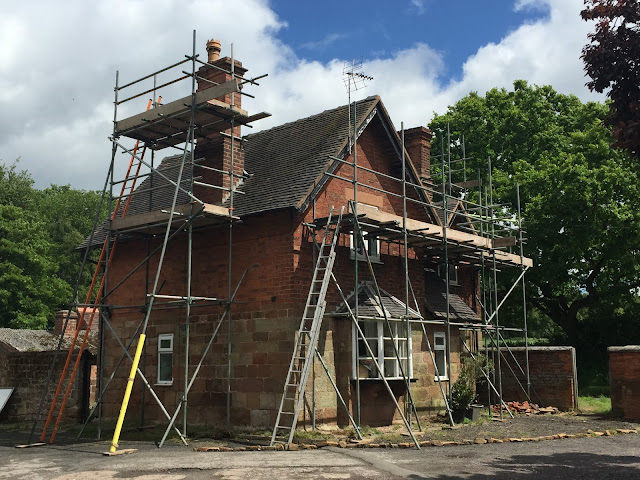 As any health and safety professional will tell you, the best time for anyone without a head for heights to climb a bouncy ladder and prance around on rickety scaffolding is during gale force winds when there's nobody around to see you go splat on the ground below.


The 'scaff', as we experts like to refer to it, started going up at 7am on Saturday (that's not a typo - it was 7am) in readiness for pretty extensive chimney and roofing work which is likely to take a few weeks.
Dawn and I headed up there as soon as the van was out of sight to have a look around and take a few pictures and I was back up today to do a few jobs while my better half was at work. And because I'm a brave little soldier I ignored the severe weather warning for high winds, telling myself that if I didn't get the jobs done now I'd have to use a ladder when it's all taken down. And I'm not good on ladders. Or even standing on chairs, for that matter.

This gave us a chance to take a close look at what needs to be done, and a visit from the roofer today made things a little clearer as he removed tiles and prodded things while tutting and shaking his head. What he'll find when the work actually starts is a worrying thought...

The main thing that we noticed was the state of the stack on the east side. We could see from ground level that it was already leaning towards the road, but being level with it revealed that the upper half is badly cracked and starting to peel apart like a banana, leaning not only to the east but to the south too.

Other issues, some of which we already knew about:

With this final point in mind, one of my scaffoldy jobs is to get the already-flaky paint stripped off the bargeboards completely to see what kind of condition they're in. And that's tomorrow's job.
Fortunately the wind should have died down by then, which is a very good thing - I'm going to need stepladders or something to reach the highest apex above Bedroom 1, and that's not exactly filling me with happy thoughts right now. 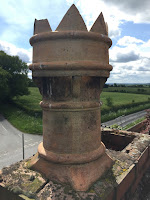 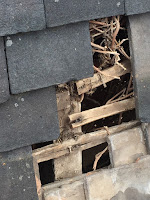 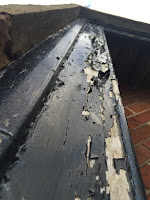