A beginner's guide to using gates

Gates. They're uncomplicated things when you think about them.

They open and close and in between they kind of just sit there being all... you know... gatey.

The purpose of gates is that they replace a section of wall or fence with a moveable bit that allows ease of access to the mysteries of beyond without leaving an unsightly hole in said wall or fence.
Utilising equally-uncomplicated hinges and sometimes a latch, they might provide a little bit of welcome privacy for people on the other side or, in extreme cases, security against ne'er-do-wells who wish to steal biscuits and other valuable items from their homes, their castles.

But to reiterate, when you boil it all down to a fundamental level, gates open and then they close again. It's not rocket thingummy. 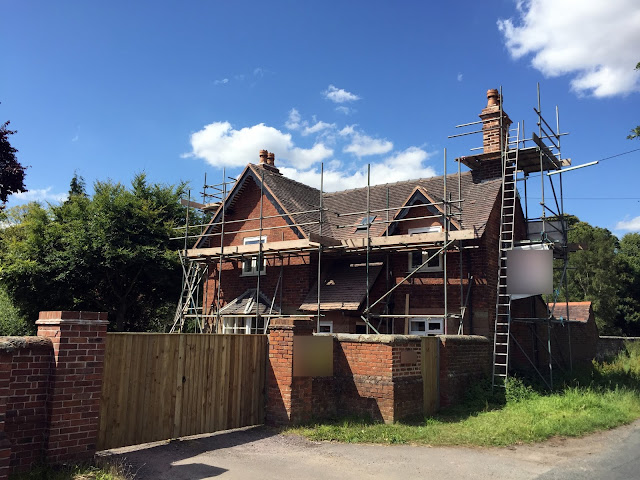 So why is it that now The Lodge has a brand new pair of entrance gates the people who find the need to use them have turned into lazy, dribbling, useless lumps of bone and gristle? I swear that most people encountering these confounding wooden puzzles must have terrible trouble tying their own shoelaces while still remembering to breathe in and out.

I feel I need to explain.
When we first came to view The Lodge many moons ago there was a regular wooden 'garden' gate leading to the front door as well as, a few feet away, a pair of heavy wooden gates across the access road, both of which were set in the boundary wall. Both of these tatty-but-useful constructions were later stolen by someone who presumably wanted to knock up a load of birdhouses and didn't want to pay B&Q prices for the timber.

The net result is that (forgetting the access gate to The Lodge which is neither here nor there) there was a gaping hole in the wall which allowed vehicles to pass through willy-nilly at all times of the day or night. This included our Saturday afternoon burglars, three weeks after we moved in.

At the time we first saw the gates they all belonged to The Crown Estate and Her Majesty the Queen so it was up to them to replace them, which they eventually did last Friday, some six or eight months after they vanished into thin air. The people we used to do the rafters and stuff at the front of The Lodge hung around for another couple of days to knock the gates together and kill two pheasants with one stone. They even let me drill and countersink some of the holes. The 'garden' gate now belongs to us whereas the vehicular access gates still belong to The Crown, because the access track is still owned by them.

Marvellous. New gates meant that our home wasn't so obviously visible to passing traffic on the main road outside and anyone who opened them would have their ugly mugs recorded properly on our HD CCTV, giving us and our neighbours down the track extra security if we needed it.
They also meant that I could run from the shed, where we're still sleeping, across to the house for a shower in just my lederhosen and kitten heels if I wanted to without being ogled at by passing cyclists and lecherous dog-walkers. Everyone's a winner.

And yet the gates have been wide open almost permanently ever since because people are ignorant dickheads. Pardon my French.
I had gone to the trouble of mentioning to everyone I could that new gates were imminent and would they mind awfully keeping them closed for security reasons, and all the people I spoke to were more than happy to oblige "because they'd always been kept closed in the past".

But the past appears to have gone and been replaced by a world where getting out of your comfortable car or off your dangerously-unpredictable horse is an energy-draining and traumatic activity that must be avoided at all costs, lest one may find oneself at the mercy of the elements and carnivorous wildlife and who knows what fate awaits such reckless adventurers?
The fact that it has been nice and sunny and the most active meat-eating mammal in the immediate area is usually SausageTheCat doesn't appear to matter. After going to the exhausting bother of opening the gates it's much easier to just let them swing around in the breeze after you drive through, isn't it?

But there's more.
Before managing to summon the energy in the required muscles to heave open the remarkably-light and perfectly-balanced gates, most people have been staring at them as though faced with a giant Rubik's Cube for the first time. I've looked on the CCTV and I've spotted cartoon question marks appearing above their heads while they scratch their chins and phone friends for advice about what to do when faced with such an insurmountable problem.

So here's a quick guide in case you ever find yourself with such a brain-teaser:
Now I know there are lots of steps above, but they're remarkably simple in reality and, with practice, you should be able to complete them all in just a few seconds, having suffered very few injuries in the process.

I'm thinking that I need to print this guide out and pin it to the gates, however, because people seem to be struggling.
On the few occasions where I've been looking at the CCTV monitor as someone attempts to navigate the newly-discovered obstacle I have already seen one car almost written-off by the powerful wind-induced backswing of the first gate and on another occasion I even saw one person dip in to one of the buckets as though it were a brick dispenser, rather than pick it up by the handle. I'm not even kidding.

The rest of the people, at least 80% of them anyway, manage somehow to open the gates but completely fail to either prop them open or close them again and just drive away, leaving them to swing around against the hinges which will eventually bend and render the things pointless (EDIT - I must be some kind of mystic... read this).

Of course I could just let this go and let people do what they like because the gates aren't even ours, but in all seriousness they - if used properly - give The Lodge a lot of privacy from the road and a little extra security, so it's a drum I'm going to have to find a way to bang with tact and diplomacy. Neither of which I'm famed for.

In an ideal world The Crown would pay for some kind of electronic mechanism that closes the gates after 60 seconds-or-so but I can't see that happening in our lifetime, so in the meantime the Gatekeeper might just go on long-term sick leave.