Until this last two or three weeks motivation hasn't been an issue for me because we have been in the destruction and investigation stage of the renovation, which has proved to be quite exciting.

But in my heart of hearts I knew it wouldn't last because rollercoasters have to head downhill now and then before they can climb back up. And after taking a little while off to recharge my batteries that's where we are now, four-and-a-half months in to the project.

There are a few reasons for this, mainly because the trades have upped and left, the weather is deteriorating and the nights are beginning to draw in as winter approaches. On top of that the tedious work inside The Lodge has begun, and only a fool would describe that as exciting.

With the plan being to get two rooms ready so we can actually move in to the house before the snow comes, rather than living in the drafty, cold shed, we have been focusing solely on the Living Room and Bedroom 1, both of which need a lot of work doing to them before we can get a lime plasterer in.

All of the gypsum-and-plastic-lined walls were stripped back to the bricks a little while ago, ready(ish) to be plastered if we can eventually get someone on board. With that in mind we have been reassured that although there is an ideal window of opportunity (usually spring to September) to get the plastering done so it can set properly in decent weather, this isn't such a strict thing when it comes to doing the lime internally because the atmosphere can be managed better. Also, with the Living Room still suffering reasonably high humidity this will help slow the 'going-off' process, meaning that it will all set better in the long-term.

So with the walls more-or-less ready it was time to concentrate on the ceiling, which may or may not need lime plastering too.

I don't know a great deal about Artex other than despite its swirly, pointy ugliness it was ludicrously-popular in the tasteless 70s, contains asbestos and people say it's a pain in the backside to remove.
But how hard can it really be?
Armed with overalls, a mask, stepladders and a chisel I soon found out why Artex has such a poor reputation.
Despite being only two or three mm thick and feather-light, this stuff only chips off in the tiniest of shards, floating to the floor like snow, and can swallow an entire day just to do a few square feet. It's a mind-numbing process. Chip chip chip chip chip.

The good news so far is that despite my certainty that the original lime ceiling would collapse because the cracks are so bad and widespread, it has stayed exactly where it should be and although there are a couple of holes here and there it all looks surprisingly solid despite a bit of sagging above the fireplace, caused by the tiled hearth above in Bedroom 1.

But there's a fly in the ointment.

Having removed about a quarter of the surface layer of Artex I have revealed a thin bluey-white layer that I can neither identify nor scrape off, but is likely to be some kind of PVA bonding coat. Once we get a plasterer sorted out I'll be asking for advice, but the pessimist in me has concluded that if it is indeed PVA - which will have been applied wet - the lime will have absorbed a great deal of it, making the ceiling impermeable to moisture which is exactly what we don't want and why I have been removing the bloody stuff to begin with.
So despite the ceiling staying in place regardless of the cracking, it might all have to come down and be re-limed anyway, probably at terrific expense. It's such a concern that I have abandoned the job for now until we can get an expert to take a look at it. It's pointless wasting energy on it in the meantime.

During our time here it has become apparent that the floor is the source of the humidity in the room, primarily because everything else has been stripped and is bone dry. It's the only possibility left.

I might have mentioned this before, but we suspect that there are quite a large number of natural springs in the area (some tiny ones emerge underneath the shed in the front garden close to the well), so we're guessing that these are the cause.
The quarry tiles, which are original to the single-storey cottage that was the forerunner to The Lodge, are probably laid directly on top of earth or ash, so it's natural that some moisture will breathe up through them. We could pull some up to take a look and although I'm keen to do that I have been dissuaded by Dawn and one or two other people for a couple of reasons:

1. Despite its age the floor is solid and reasonably level. Pulling it up and re-laying would be very time-consuming and could cause significant future problems.
2. If they are laid directly on damp earth, what could we do about it? The only reasonable course of action would be to tank it with plastic sheeting or something but that would prevent the floor breathing and would create stale water beneath that would eventually start to stink. Besides, the water will always find a way out - probably up the walls - which could also cause future problems.

That's why, for now, we're looking to leave it as it is and give it a damn good clean.


Which is another ongoing tedious job.
When we first pulled the damp, mouldy carpet up in the Living Room we found that the rotten rubber underlay had been glued directly on top of the tiles. Not just in dabs here and there, but across the entire surface and in to the small hallway outside the door. Every square millimeter.
As well as the rock-solid glue reside that was left we also found a layer of salts from years of trapped moisture, a layer of utter filth and grime and something unidentifiable. One theory offered (with a worrying degree of certainty) by a local tradesman was that the previous gamekeeper had a lot of dogs which he let run around unchecked, peeing all over the place. So he reckoned it could be a layer of dried urea.
It doesn't bear thinking about, to be honest. I wish he'd kept it to himself.

A straight wash-and-scrub on a test patch a couple of months ago did very little, so I dug out a variety of scrapers and bought some brick acid to dissolve as much as possible before taking to my hands and knees. 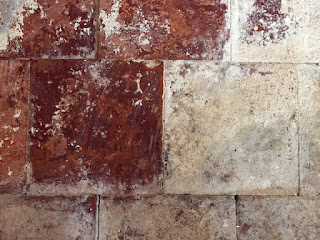 In the end it has turned out to be a labour-intensive mix of both removal methods at the same time, neither of which is doing a job I'm particularly pleased with. Although much of the white glue-and-pee (and red paint, as it turns out) layer is disappearing there is still a lot remaining that I just can't shift, no matter how much elbow grease is applied.
Nevertheless it's only a first attempt, so if I can get the majority of it off to begin with we can look at it again later with fresh eyes.

So there's another job that hasn't been finished, and I hate leaving things like that.

But with our second skip sitting outside waiting to be filled, I had one more job to get on with...

This is a much simpler room to deal with, in that there's no damp to be concerned about (the mouldy wallpaper when we first got here seems to have simply been caused by low airflow, condensation and gypsum plaster) and the original floorboards will be restored further down the line.

The west and south external walls featured a thick layer of very hard and impermeable cement bonding coat with a thin gypsum skim and foil-and-tar-backed wallpaper on top. The internal east wall that backs on to the Bathroom, despite being lime, had been extensively repaired with cement/gypsum and the internal wall to the north - also the south wall of Bedroom 3 - is original lath and lime plaster with a gypsum skim and wallpaper applied on top.

For financial reasons (and practical ones - we could end up damaging the laths), we have decided to leave this north wall as it is for now, despite the gypsum, because being an internal upstairs wall breatheability isn't such an issue. Moisture should be able to get in and out of the wall through the floor/loft so there's no necessity for it to breathe through the surface.
Which left three other walls in need of taking back to the brick, just like in the Living Room.


There's nothing exciting to report here either other than it took a great deal of tedious chiseling and skip-filling but - barring the wall behind the radiator, which will be removed shortly - it's finally done.
In the process I've discovered a herringbone-esque design in the bricks above the stone window lintel (apparently known as a Jack Arch - much like those above the bedroom fireplaces) which when the plastering is done we might try to leave as a feature, and for the moment we're planning to leave the east and west walls as bare brick which will not only save a bit more money but should look lovely when cleaned-up and coupled with a pale wooden floor and log burner.

There's also the cracked lime-and-Artex ceiling but I'm not touching that until I learn what the deal is with the ceiling in the Living Room.

So there you have it.
It's all really boring stuff, admittedly, but it has to be done. It can't all be about hunting for a forgotten fortune in the house's nooks and crannies, but I'm not giving up hope yet.

We still plan to pay the lime plasterer in doubloons whether he likes it or not.