The Lodge is on mains water but not mains sewerage, instead all our waste ‘disappears’ into a septic tank. The plus side of this means you don’t have to pay the water company for drainage, but that’s countered by paying for a person with a ‘honey wagon’ to come and empty it once a year instead.

Having previously only ever had to ‘flush and forget’, I decided that some research was in order. Firstly into how septic tanks actually work…

Older septic tanks can be made out of brick, block, concrete, and/or any kind of receptacle that happened to be lying around at the time. More modern tanks are usually constructed out of fibreglass or plastic. Ours is brick.

To find your septic tank, look around for some kind of manhole cover or two. Ours was pretty easy to spot, given that our ‘garden’ is currently made up of a variety of types of hardstanding, and it also has a vent that stands proud of ground level. 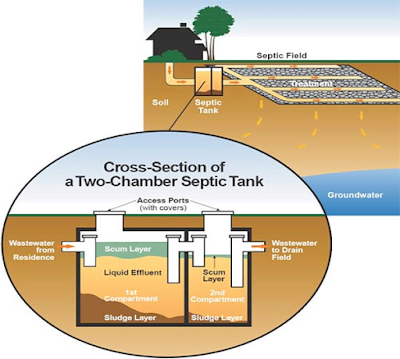 The settlement or holding chamber is where the waste water enters the tank.
Here anaerobic bacteria (hence the term ‘septic’), start to decompose the biodegradable waste, reducing the volume of solids and converting that into a sludge layer at the base of the tank.

Fat, grease and floating solids form a scum layer at the top of the tank, leaving a liquid area in the middle that will still contain some suspended solids. Nice.

The liquid then naturally passes into the filtration tank over time, via H-pipes or gaps in bricks/blockwork referred to as baffle walls, and further settling takes place.

Finally the liquid passes out through a filter of some description via into a soakaway or drain field (also referred to as a leach field), where the remaining impurities are dealt with by aerobic soil bacteria.


Because the sludge and scum layers build up over time, you need to get your tank emptied once a year by a man in a tanker. We had no idea how long it had been since ours was emptied, and the very nice lady on the phone warned us that sometimes, in a tank that has been not been emptied for a long time, the sludge layer solidifies so much that they can't empty it. Grim.

Luckily for us they had no problems, and a mere 15 minutes and 450 gallons later they were on their way.

Wikipedia has a great entry on the science of how the bacteria in the tank works here. In summary, the microorganisms present in the tank break down any biodegradable material via a series of processes. It's called anaerobic because it's done in an environment without oxygen:

These processes produce a 'digestage', i.e. the sludge, and also a biogas, which consists of "methane, carbon dioxide and traces of other ‘contaminant’ gases". This biogas is one reason why there are dire warnings about opening and/or entering your septic tank.
We lifted the lid on ours to have a look and didn't die, but don't take that as advice! Apparently the gases in the tank can overcome you very quickly and the bacteria are dangerous.

And besides, why the hell would you want to go in to your septic tank anyway?