Back on the roof - in for the long haul

If we've learned anything from our recent two weeks away in Spain on the motorbikes, it's that time moves quicker the closer you get to the equator. Ergo, it gets slower the further you are away.
Here at The Lodge time moves at around one quarter of the pace it should, although that's not necessarily A Bad Thing because it gives us more of an opportunity to do stuff.

Before we left the shores of Old Blighty we were eagerly awaiting stuff to begin.
The scaffolding had been up for a week or two, inspections done, the dangerous chimney stack was removed brick-by-brick and I had ripped away what turned out to be rotten bargeboards right across the front of the house. It was a shame that timings weren't better and that we'd have to leave the roofing and wotnot to move along unsupervised, but it was work. WORK!
THINGS WERE HAPPENING!

Two weeks later we returned to find that half the new stack had been built.


The other half was completed a few days ago, but other than that not at lot has been going on, really. Where that could be seen as a problem for some people, we're okay with it. Our contractor has been really relaxed about things that need to be done and when decisions need to be made, so we've forced ourselves to step out of the Town Mentality and now we're pretty relaxed too. Time is quite fluid here.
The main benefit is the scaffolding because it gives us plenty of time to find a solution for the new bargeboards. We also need to look at replacing a couple of rotten timbers up there at the same time. Then cost it. And we've just come back off holiday.

So, with a heatwave well and truly under way here at The Lodge, here's where we are so far. Aka 'typing anything to avoid baking to death while stripping paint up the scaffolding'.

The original stack, as explained in an earlier post, was trying to free itself in two directions from the constraints of being house-bound. Our chimney sweep had found evidence of a fire in the other chimney in days of yore, and that had cracked the brickwork badly.
Our building/roofing contractor, in taking apart the old brickwork, saving all the good ones to be reused in the rebuild, also found evidence of a fire in this chimney, which had destroyed a very important section of the stack and its support.
It's not easy to explain, so I'll see if I can find a photo to show it (edit: above), but there's a mid-way section on the upright chimney stack which steps in at 45 degrees before the then-narrower brickwork continues up. Let's call this the hip, but only because I heard someone else refer to it as this once. The hip.
The hips on The Lodge's two chimney stacks are made of sandstone, with the remainder of the structures being brick. Being a solid piece of sandstone going right around each stack, this provides a good deal of support for what's above it.


But the hip on the east stack overlooking the main road was... kind of missing bits. Quite large bits. In fact about a quarter of it wasn't really there at all.
It seems that the severity of the aforementioned fire - from the Dining Room fireplace this time - had blasted the inside of the hip back to its component parts over a significant area so that the support provided by it was minimal to say the least.
So while we were on our hols a heavy-duty steel box-frame was made to sit on the hip and go all the way around with a cross member bisecting it to cut between the two flues. Sadly we don't have a photo of this yet because it was made and set in place while we were away, but I'll see if I can get one.
Then the rest of the stack was rebuilt with 5 sand / 2 lime / 1 cement to give it some breatheability while still being strong as bull for extra support. We would have liked a pure lime mix with no cement but we've had to compromise for the sake of safety. Apparently that's quite important.

One thing we don't want is to finish the stacks with unsuitable or mismatched chimney pots, so we've been idly looking around for a couple of months now.
The one and only pot on The Lodge now is a damaged yellow king or queen crown/bishop pot (depending on who you ask). So we wanted four new pots altogether and finding that many undamaged ones that are 'period', reclaimed and that you like all in one place isn't a simple task.
But with the time quickly approaching (about half regular speed) to find some, we remembered a set of four deep brown salt-glazed Crown pots that we were interested in some weeks ago. One had a small repairable chip but we were willing to overlook that in favour of getting a matching set.
When we finally arrived at the reclamation yard in Staffordshire it was a relief to see they were still there... but so were some others.
There were plenty of red ones, which seem relatively common, and four slightly shorter orangey Queen pots caught our eye too.
So after thinking about it over hot chocolate and cake in the cafe we plumped for the red ones so they'd be easier to replace like-for-like if one were to get damaged. But when we started pulling them all out we discovered so many different styles, voiding our argument entirely, that we went for the orangey ones because they were undamaged, matching, and supposedly more unusual based on our admittedly limited research.

They cost £450 (I know, I know, but we negotiated down from £580!) and need cleaning up a little bit, but in the meantime I'll email a photo to the reclamation yard to ask about their provenance (the fella we were told to ask wasn't in at the time) so we can carry some of its history back to The Lodge if we can.

The next task is to find unobtrusive rain/bird guards so we don't spoil the character of the pots... which we'll forget about anyway once we're back down at ground level. But it's all about the detail, isn't it.

The sloping timber planks that face the edge of the roofline up to the apex? Painted or stained, and sometimes they're plain or carved all fancy and decorative - they're the bargeboards. And I wanted to check and repaint ours while the scaffolding was up.
But they were dust.


Mistakenly, and I'm braving-it-out by admitting a Rookie Mistake here, I managed to waste a whole day stripping paint off one of the outer boards without checking what it was covering. I had noticed mismatched architrave bordering the bargeboards on both apexes but I didn't think much of it until the next day when I realised the architrave must be covering something - and it was. Lots of rot. A couple of inches of the ends of all four boards and portions of the long edges on a couple were ruined and had been bodged, filled and painted-over quite badly over the years.

I painstakingly managed to pull all of the boards off but with ladders on top of scaffolding to help the process along at the apex above Bedroom 1, it didn't do much for my nerves. Likewise the denailing process.
The timber behind the boards is a similar story in part, which is going to increase the cost we think. A couple of the rafters are also showing signs of rot and we don't yet know if they can be repaired or they'll need to be replaced. If it's the latter at least we already have the roofer on board and the scaffolding up. Every cloud.

And so begins the process of deciding on the new bargeboards, which sounds easy enough but we need to decide on the timber type, which carpenters to contact (could I make them myself?), detailing, colour and the type of breatheable stain/paint we'll use.
Ho-hum.
The good news is that because the back (north side) of The Lodge doesn't bear the brunt of the weather we think the boards there will be in better condition. We can't check that just yet because the scaffolding doesn't go around that way and we have swallows nesting with fledglings in the apex. The long arm of the law has something to say about disturbing them (and they're fun to watch, too), so that's a job for another day. 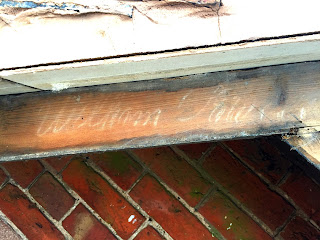 Oh, and as an aside, the timber behind the bargeboards above Bedroom 2 had been replaced in the past and a name had been chalked on one in olde worlde script. It's either William Powell or William Fowler, we can't quite tell.

Either way, Will old boy, we salute you.
This blog post is dedicated to you, whenever you may be.
Posted by Muz at 17:01:00