A house within a house?

Following months of speculation we have finally found irrefutable evidence of something we always thought possible but could never prove - The Lodge started life as a single-storey building. 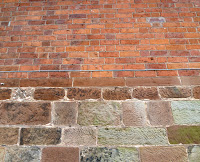 The main thing that got us thinking about this part of the building's history is pretty obvious from the north, south and west elevations because the lower half was built with sandstone whereas the upper half is brick. That could have been designed into the original structure for some reason though, so it certainly wasn't evidence of later building work.

But during a brief lull in a hectic past week that I'll post about later, dad-in-law Trevor grabbed a set of step ladders and poked his head through the tiny hatch in the kitchen ceiling that we had managed to forget about exploring during the three months we've been here.

And he found a series of what we assume are cast iron Georgian gutter brackets.

But The Lodge is supposedly a Victorian building, so why Georgian?
Well, there's the thing.

The sandstone lower half that I mentioned earlier is visible on three sides, but the east wall forms part of a longer boundary wall to the entire estate that goes on for miles. The house is an integral part of that wall.
But, as we understand it from our surveyor, the bricks used to make that wall are of Georgian origin (1714 - 1830) because many feature stripes running from one end to the other from where they were stacked at angles on top of one another before they were fired and hardened.

But that in itself isn't conclusive either.

It's possible that the Georgian wall was there first and The Lodge was simply tacked on to it at a later date in the Victorian era, with the builders saving money - and bricks - by using what was already available to them. Why build four walls when you can build three?

Except...
When we came to tackle the Living Room recently, stripping off layers of plasterboard and wotnot and taking the walls back to their original condition, we found that the bricks used to build the wall between the Living Room and Toilet 1, which the lavvy and sink currently sit against, are also striped Georgian ones. It also seems that all of the walls in the living room are brick which were later faced externally with sandstone, creating a double-skinned wall across, we assume, the entire ground floor apart from the east (boundary) wall.
So there was the first bit of reasonable evidence that got us thinking, once again, that The Lodge may once have been single storey, built in Georgian times.

But the gutter brackets were the final piece of the jigsaw. There's no earthly reason why horizontal guttering would have been fitted to The Lodge half-way down the walls, so the brackets must have been just below the roofline of a building with just one floor.

It then follows that the first floor was added at a later date, making those brackets and the guttering they were supporting redundant, and then the kitchen - which is a comparatively modern addition using modern bricks - was simply clagged on to the back of the house and given a shallow-pitched roof which covered the original gutter brackets. Once the suspended ceiling was put in below it, the very small void it created was hidden from view and completely forgotten about until Trevor's curiosity got the better of him in the summer of 2015.

All of which raises an even bigger question.
For ease I have been assuming that The Lodge is Victorian and was built somewhere around the 1850 mark, but it seems I've been looking at too big a picture.
There's a smaller picture - and a smaller house - in there too.
...so when was it really built?

It makes me sad to think that we might never know.

A few hours after posting this, I was contacted by a local historian who I had emailed last week to ask for any information he might have. His reply seems to add weight to our conclusions, although his research has also confirmed my earlier findings in that there is very little recorded history of The Lodge for two reasons - 1) it was little more than a utilitarian building, and 2) many records have been lost, spirited away or destroyed over the years.
Here are a few excerpts, although I have had to blank out some bits for reasons of anonymity. The gist is still there, though:

"I have been under the impression that all the Lodge Entrances to the XXXX Estate are post 1848 when the XXXXs bought the property. There followed in the 1850’s an extensive XXXX building programme in an architectural style known as XXXX Style. I would have put [The Lodge] in that category."

"In the 1841 census, William Scott is listed as living at “[The Estate]”. This is most likely to have been a cottage in the vicinity of presentday [The Lodge], or even a cottage from which [The Lodge] was later built."

Working on the theory that The Lodge was once a single-storey building that was possibly known by another name (XXXX House?) until it was extended upwards, my interpretation of this is as follows. The photos are from my own dig through the censuses back in February:

The problem with censuses is that they only started in 1841 and back then didn't feature as much detail as they do nowadays, and even then it was often inaccurate (hence XXXX House in the photos, which could be a throwback to the cottage's original name) so to go back further will take a degree of ingenuity and luck.

Nevertheless, to continue the theory it seems that The Lodge's origins stem from at least 1841 and possibly (probably) much earlier than that. If the gutter brackets mentioned at the start of this post are indeed Georgian we could be looking as far back as 1714, although that seems unlikely.
Posted by Muz at 11:33:00